Broken Heart have secured a Gold Award for Navy Strength Gin and a Bronze Award for Spiced Whisky at the Tokyo Whisky and Spirits Awards (TWSC) 2021.

This was the 3rd year of the competition with 444 spirits entered, including gin, rum, vodka, tequila and whisky. The TWSC also included entries of Shochu which is similar to a Japanese Vodka made from rice, barley, rye, sweet potatoes, unrefined sugar, corn, chestnuts, or shiso. Of these 444 entries 376 were awarded with only 85 of them Gold. Entries are not guaranteed Awards so here at Broken Heart we are thrilled to have received an award for both our entries, Navy Strength Gin and Spiced Whisky.

According to the TWSC committee the goal of this competition is to select, award and promote the world’s finest whisky and spirits of all. Judged by a panel of Japanese industry experts with profound knowledge and refined palate this competition was the first to be held in Japan back in 2019.

Whisky and liquors are attracting more attention than ever. Between 2016 to 2017, nearly 20 distilleries appeared across Japan and it is said to be the “Dawn of the Japanese craft distilleries.” This phenomenon is not unique to Japan as the trend of craft distilleries started from Scotland and is now expanding not only to Ireland, Europe, America, Canada, but also to Taiwan, India and other Asian countries as well.

Here at Broken Heart Spirits we are delighted to be recognised by such a knowledgable panel and congratulate all other winners of Awards in the TWSC. 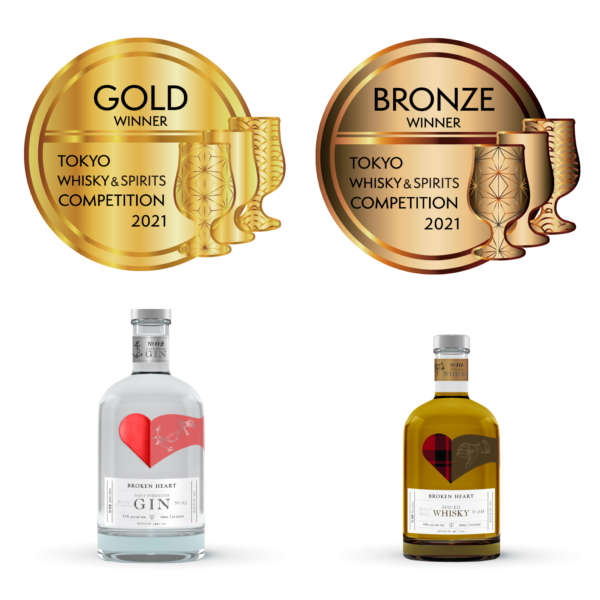